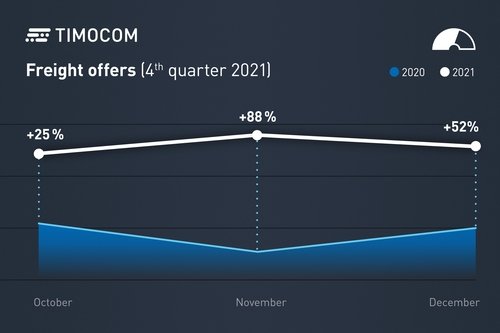 During the fourth quarter of 2021 there was a continuous upwards trend in the number of freight offers and an imbalance in the ratio of freight offers to vehicle space. TIMOCOM’s transport barometer continues to show an increase in freight offers in the Smart Logistics System as compared to last year. Accumulated data from 46 European countries recorded a marked increase of 51 percent. This also represents a slight rise as compared to Q3.

Despite the introduction of stricter rules in light of the ongoing Coronavirus pandemic, the transport market continued to grow in the fourth quarter. 9 percent more freight offers were entered into the TIMOCOM System from October to December 2021 than were entered during the third quarter. November and December, in particular, were strong months across Europe for freight forwarders and transport companies thanks to a seasonal upswing: freight offer volumes on the spot market increased by 88 percent in November as compared to numbers from last year. In December, freight input in the System rose by 52 percent as compared to December 2020.

In October, freight numbers dropped by 10 percent as compared to the previous month, but the transport market recovered in November and rose by 8 percent once more. Despite a renewed slump of -5 percent in December, the final result was positive:

freight offers increased by 51 percent across all of Europe as compared to the fourth quarter of 2020. The constant increase in demand is a signal that the economy is recovering, despite the fact that the ifo Business Climate Index for Germany sat at 94.7 in December. Issues with delivery bottlenecks for primary products and raw materials have only increased, causing problems for industrial companies. Retailers in Germany consider the situation to be just as serious as it was in the winter of 2020. And yet demand for transports was high in Q4.

After an unusually strong September (+60%), the internal German transport market generated 18 percent less freight in October than during the previous month. But freight offers then increased by 2 percent, in contrast to the decline experienced in the third quarter (-18%). This means the fourth quarter is up 37 percent as compared to the same quarter last year. November in Germany was also the strongest month for freight offers in Q4, with an increase of 87% as compared to last year.

There simply is no end to the demand for cargo space. Despite supply chain bottlenecks and delays, vehicle space is a limited and highly sought after commodity, including for hinterland transports from ports. There is an imbalance in the ratio of freight offers posted and trucks available to deliver the goods. This development is affecting transport prices, according to Gunnar Gburek, logistics expert and Head of Business Affairs at TIMOCOM: “Delivery prices are under pressure due to cost increases for fuel and vehicles. And of course this is only exacerbated by increased personnel costs, carbon taxes and additional services fees, for example for loading and waiting times,” says the company spokesman. “We all need to take care not to block off already limited capacities over the long term: reserving trucks that are not actually needed reduces the amount of cargo space available and will lead to an increase in market prices.”

Increase in use of tippers, tankers and mega trailers

The vehicle types most requested in 2021 as compared to last year were tippers and tankers. Demand for the latter increased by 236 percent, while demand for tippers increased on average by 297 percent. But refrigerated transports are also very much in demand: temperature controlled trucks and refrigerated trailers were requested 184 percent more often than they were last year. There was also more demand for jumbo and mega trailers, which appeared in offer descriptions 159 percent more often than in the past year. Barely requested in 2020, height adjustable trailers were 90 times more in demand this year, one sign among many that transport customers are attempting to send as many goods as possible in a single load. A trend that is likely to continue in 2022.

Routes to and from the UK experienced one of the largest reductions in European road transport offers as compared to the previous year.

Freight from the UK to Germany declined by 11 percent in October, but was up by 25 percent in November before collapsing once again by a whole 57 percent in December.

This sharp downturn was caused by the spread of the Omicron Coronavirus variant and a renewed lockdown in the UK, but also of course by the effects of Brexit and changing customs rules.

More freight within and to France

In contrast, there were positive developments when it came to freight within and to France. According to the European Commission, France’s GDP rose by 6.5 percent, stronger than the European average of 5.9 percent. This trend was demonstrated by the increase in transports within the country.

There was also an increase in freight offers from Germany travelling to France:

Significant increase in transports from the Netherlands

The amount of freight travelling from the Netherlands to Germany also increased. Germany declared the Netherlands a high-risk country in November, due to the spread of the Omicron variant. The country then went into lockdown once more in December. The result was additional transports and an increased flow of goods in Q4.

The results of the fourth quarter 2021 compared to last year look as follows:

Polish transport market in decline towards the end of the year

The total number of transports within Poland decreased in the fourth quarter. The percentage of freight to vehicle space was still up by 36 percent as compared to the fourth quarter of 2020, but freight offers dropped by 12 percent as compared to the third quarter. In addition to the economic developments in Europe, this could be due to the situation on the Polish/Belarusian border. The migrant crisis meant that the border was closed for days, with trucks stuck waiting on both sides of the border.

But Poland did manage to recover somewhat thanks to the Christmas and New Year season. After a 4 percent decrease in October, the transport market recorded an increase of 21 percent in November. But this growth and the Christmas season did not ultimately turn the tide for transports within Poland. Poland saw similar developments at the end of last year, giving rise to the hope that things will improve in 2022.

Overall, the recovery of the European road transport industry, which began in the second half of 2020, continued during 2021. However, as a result of the pandemic, 2021 was marked above all by capacity and delivery bottlenecks. And of course by the serious driver shortage in Europe. On top of all that, inflation increased, and along with it raw material and fuel prices. These will continue to be problems for the logistics industry this year. But it is important to remember that there is no danger of shortages, says Gunnar Gburek, Head of Business Affairs at TIMOCOM. However, he admits that there could be more delivery delays within Europe. “In terms of road transport, it is specialised vehicles, such as those with refrigeration, that will not always be available at short notice. For a standard transport order, it is much more likely that companies will be able to find what they need on the sport market,” he continued. “Capacities are limited, but available. Digital applications can help to optimise cargo space use.”

The FreightTech company TIMOCOM has been using the transport barometer since 2009 to analyse the development of transport offers and demand across 46 European countries via the freight exchange, which is integrated into the Smart Logistics System. More than 135,000 users generate up to 800,000 international freight and vehicle space offers daily. The System helps over 50,000 TIMOCOM customers to meet their logistics goals smartly, safely and simply.