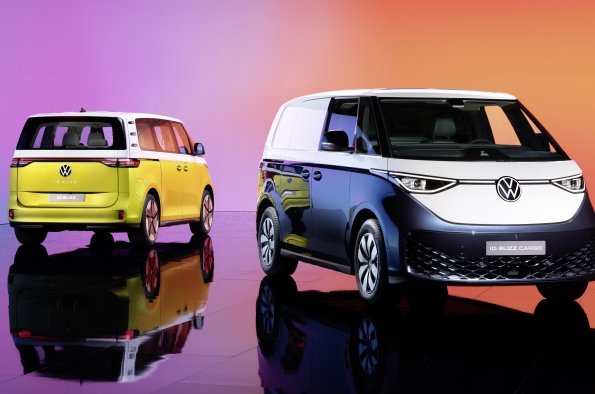 In the year that Volkswagen Commercial Vehicles launched their first all-electric ID. Buzz and ID. Buzz Cargo, and the Volkswagen Multivan arrived on the roads, the manufacturer has received no fewer than ten awards for their innovative all-new vehicles.

An icon for the electric age

The ID. Buzz Cargo balances the design aesthetic of the iconic T1, with a futuristic look and feel fit for an electric era.

A judging panel from the Motoring Media Association of Ireland (MMAI), which consists of motoring journalists from across Ireland, named the ID. Buzz and ID. Buzz Cargo the best car and van of the year, a feat that has never been achieved before. In addition, the ID. Buzz people won the MPV of the Year category, making it a hat-trick for Volkswagen Ireland on the night.

Accepting the Irish Van of the Year trophy, Alan Bateson, Director for Volkswagen Commercial Vehicles Ireland said: “I am extremely proud to accept these awards on behalf of the entire Volkswagen Commercial team. The ID. Buzz Cargo is a vehicle that has been 75 years in the making. This is a truly historic moment, heralding a new era of sustainability for both passenger cars and commercial vehicles. The phrase game-changer is bandied around liberally in the motor trade but the ID. Buzz is a truly a unique proposition. Everyone in the Volkswagen Commercial team feels privileged to have played their part in the delivery of these iconic vehicles and we cannot wait to see the reaction from members of the public now they are finally on Irish roads.”

The model took ‘Best Medium Electric Van’ at this year’s Driving Electric Awards 2023, with Editor, Richard Ingram, praising the vehicle for its “retro styling”, paired with the strong range and practical load bay.

Also winning the judges’ attention at the 2023 carwow Awards, the ID. Buzz received a ‘Buy It’ seal of approval after being praised for its iconic design and cutting-edge technology.

At the What Van? Awards, the ID. Buzz Cargo’s long range and innovative driver safety and convenience technologies were highlighted as judges crowned it ‘Electric Van of the Year 2023.’ At the same time, the ID. Buzz’s electric driving performance saw it take home ‘Best Van-Based MPV’ at the What Car? Van and Commercial Vehicle Awards.

Spacious and flexible interior
Adding to the range’s impressive list of accolades in its debut year, the ID. Buzz was crowned ‘Multi-Purpose Vehicle of the Year’ at the 2022 Top Gear Awards, with experts praising clever storage configurations and impressive spaciousness – with a load capacity of 1,121 litres, 2,205 litres with the seats folded down – making it the ultimate family-friendly car, and a deserving winner of the ‘Multi-Purpose Vehicle of the Year’ Award. The spaciousness of the all-electric van was further commended at the What Car? Van and Commercial Vehicle Awards.

Not wanting ID. Buzz or ID. Buzz Cargo to take all the limelight, Volkswagen Commercial Vehicles’ new seven-seater Multivan – which offers 1,844 litres of space with the rear seats removed – picked up the Professional Driver Award for ‘Multi-Purpose Vehicle of the Year,’ with judges praising its versatility and unrivalled sense of space.