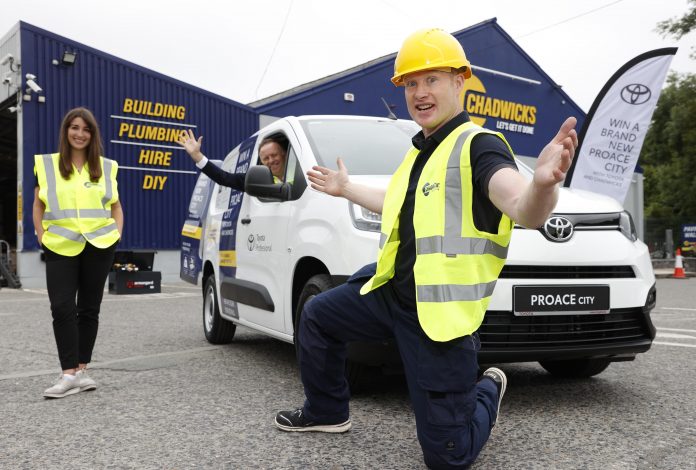 Toyota Ireland has teamed up with Chadwicks, Ireland’s leading builders’ merchants, to give Chadwicks customers the chance to win a brand-new 211 Toyota Proace City. The partnership celebrates the launch the Toyota Proace City, which has arrived into Ireland for the first time and is now available in Toyota dealerships nationwide.

The partnership between Toyota and Chadwicks is a natural fit, as the Proace City is the ideal vehicle for Chadwicks trade customers. Designed for commercial use, the Proace City is perfect for the busy tradesperson thanks to its generous capacity and clever and comfortable design. With two wheelbase lengths to choose from, the Proace City can serve any business with ease. The Proace City has a capacity of up to 1 tonne and it can accommodate two euro pallets on both lengths.

It is also equipped with an eight-inch touchscreen to access audio and smartphone functions, with MirrorLink, Apple CarPlay (including Siri assistant) and Android Auto (including Google assistant), plus Bluetooth, and USB/Aux-in connections. The Proace City prices start from €15,038 ex. VAT.

Not only will the winner be driving away in a brand-new Toyota van, but Chadwicks will also fit an Armorgard TuffBank Van Box into the van which has hardened steel plates and anti-jemmy features ensuring tools and other important items are kept secure. The lucky winner will also take away a selection of state-of-the-art speciality power tools, everything neeeded to get the job done!

The Proace City will be on display in Chadwicks branches across the country from 13th August, including Lucan in Dublin, Ballysimon in Limerick, Wellpark in Galway and Midleton in Cork. Chadwicks customers can enter the competition online at https://www.toyota.ie/PROACE-CITY-CHADWICKS and more details are available in any of the 37 Chadwicks branches nationwide. Customers visiting the branch can also avail of a host of in-branch special offers that are specifically catered to trade customers’ needs until September 30th.

Steve Tormey, Chief Executive of Toyota Ireland commented on the new partnership: “We’re delighted to announce that we are partnering with Chadwicks to give one lucky winner the new Proace City. The new Proace City offers improved practicality and best-in-class features, something we know Chadwicks customers are always looking for. With Proace City we are now catering to a much broader commercial market than we’ve served before and this partnership with Chadwicks allows us to talk directly to potential new business customers for the Toyota family. The new Proace City doesn’t just serve as a great offering in tech, safety and capacity, but is supported by the Toyota Professional range of services, which delivers a level of service that never lets you down. With this, all customers, understand that Toyota always put the customer first and they can rely on the brand for total peace of mind.”

Pat Moore, Category Director of Chadwicks Group added: “At Chadwicks we are continuously looking at ways we can add value to our customers and we are delighted to partner with Toyota on this exciting competition. Working with Toyota we have put together the ultimate prize package for our customers which not only includes a brand-new van but also a highly sought after Armorgard TuffBank Van Box and a selection of brand-new power tools. We would like to wish all our fantastic customers the very best of luck in the competition and we look forward to announcing the winner later in the year. In the meantime our customers can view the van at several of our branches nationwide.”

The Toyota and Chadwicks competition runs from August 13th to November 30th 2020 and is open to Chadwicks trade customers only*. The Proace City will be supplied to the winner no later than the 31st of January 2021. Visit https://www.toyota.ie/PROACE-CITY-CHADWICKS to enter this competition and for full terms & conditions.