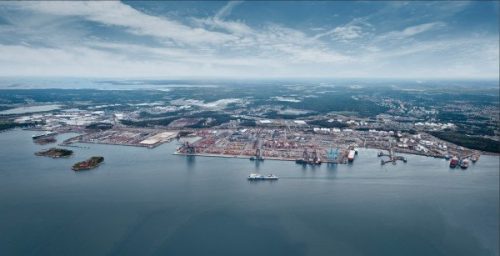 In an effort to speed up the transition to fossil-free fuels in the transport sector, Volvo Group, Scania, Stena Line, and the Port of Gothenburg have joined forces to bring about a significant reduction in carbon emissions linked to the largest port in the Scandinavia. The aim is to cut emissions by 70 per cent by 2030.

Trade and freight transport are vital to expand public welfare and to ensure function and development of society. At the same time, the transport sector is a highly complex system, involving different modes of transport and organisations collectively facing big climate challenges.

“No single organisation or individual holds the key to meeting the challenges ahead of us. Collaboration is crucial and we are pleased to bring on board two of the world’s largest truck manufacturers and the world’s largest ferry company. With our collective expertise, breadth, and market presence we can make a real difference,” said Elvir Dzanic, Gothenburg Port Authority chief executive.

Named the “Tranzero Initiative”, this venture is focused on the one million truck transports and the 55,000 tonnes of carbon emissions generated from road transports to and from the Port of Gothenburg each year. The Initiative also includes electrification of sea transport.

The companies involved will introduce a series of interlinked measures designed to accelerate the switch to fossil-free fuels. This task has already commenced with a needs analysis and mapping of freight flows as part of the commitment to offering the market the right products and establishing a fossil-free fuel infrastructure to support this development.

Gothenburg Port Authority will produce the necessary infrastructure and access to fossil-free fuels for heavy vehicles, including electric power, HVO, biogas, and hydrogen gas. Volvo and Scania will put commercial offerings in place for their heavy truck customers, ensuring that in time land transport becomes fossil free in accordance with the goals laid down by the port. Stena Line will also have a key role to play by ensuring new fossil-free vessels are brought into service on the Gothenburg-Frederikshavn route by 2030, moving from vision to reality with its battery-powered vessel concept Stena Elektra.

Welcomed by the Government
The Tranzero Initiative is welcomed by the Swedish government and is entirely in line with the ambition for Sweden to become the first fossil-free country in the world. The chief executives behind the Initiative are also members of the Electrification Commission, which was set up by Minister for Infrastructure Tomas Eneroth last autumn.

The transition to fossil-free transport to and from the port will need government support for companies that need to upgrade their fleets, for example designated grants, subsidised charging points, and fossil-free fuels.

“We have had a long-standing exchange of views and ideas with the government regarding the challenges we are facing, and our goals are the same. The transport sector needs to move away from its reliance on fossil fuels and with the Tranzero Initiative we are taking a monumental step forward,” said Elvir Dzanic.