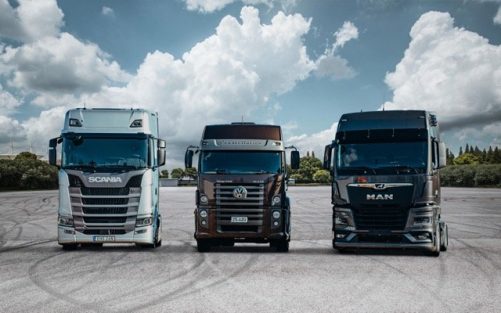 As expected, the TRATON GROUP, the parent company of Scania, MAN and Volkswagen Caminhões e Ônibus (South America) recorded lower unit sales, sales revenue, and earnings in the first six months of 2020 in the wake of the expected market downturn in Europe and the significant impact of the global COVID-19 pandemic.

“We had already expected a downturn in demand in the European market, but the COVID-19 pandemic meant that it turned out to be more significant and also affected other regions. Now that our business is slowly stabilizing following the severe slump in April, we are assuming a gradual recovery in sales in the current quarter, provided there is no surge in the number of new infections,” said Matthias Gründler, the TRATON GROUP’s Chief Executive Officer. “Together with our experienced team, the coming weeks will see us paving the way for the further stabilization of our operating business and the continuation of our Global Champion Strategy,” added Mr. Gründler

The decline in unit sales in the Truck business (including the MAN TGE van) of the three brands Scania, MAN, and Volkswagen Caminhões e Ônibus was most significant in Europe (EU27+3 region), where it fell by 46%. The South American market also suffered from the consequences of the COVID-19 pandemic, with unit sales of trucks contracting by 22% in that region. In the Bus business, South America was the weakest market in terms of unit sales with a drop of 31%, Europe (EU 27+3 region) posted a less pronounced decline of 22%.

The increasing spread of the coronavirus had already additionally impacted unit sales in the first quarter, leading to plant closures in our global production network starting in mid-March. The TRATON GROUP brands gradually restarted production at their plants at the end of April, and all sites are now producing vehicles again. The recovery in unit sales that began in May continued in June.

The TRATON GROUP has taken extensive measures in response to the COVID-19 crisis. In addition to establishing contingency plans and temporary production stops, these also include in particular measures to safeguard the Company’s liquidity. “In response to the market downturn, we imposed systematic savings and were able, for example, to significantly cut our non-personnel operating costs. We reprioritized our research and development projects without letting sight of our goals in the field of alternative drives,” noted Christian Schulz, the TRATON GROUP’s Chief Financial Officer.

In addition to cash funds of €2.6 billion, the liquidity reserves available to the TRATON GROUP as of June 30 included credit lines of €5.6 billion. TRATON SE recently entered into its first revolving credit line of €3.75 billion, which serves as a liquidity reserve for the Group and replaces some of the bilateral credit lines. This will enable TRATON to increase the flexibility of its financing options.

The operating units at a glance

The continuing COVID-19 pandemic and its effects on the economic environment are making it extremely difficult for us to make any concrete statements about the expected future course of business. The impact on customer demand and supply chains still cannot be estimated with any degree of reliability, not least because of the possibility of a further rise in infection rates in Europe or other regions of the world.

“Provided there is no surge in the number of new infections and the associated countermeasures adopted by the countries, we are assuming a gradual recovery in our business activity in the second half of 2020. Overall, however, we continue to expect a dramatic fall in unit sales for the fiscal year, and cannot rule out an operating loss for the TRATON GROUP in fiscal year 2020,” said TRATON’s Chief Financial Officer Christian Schulz.