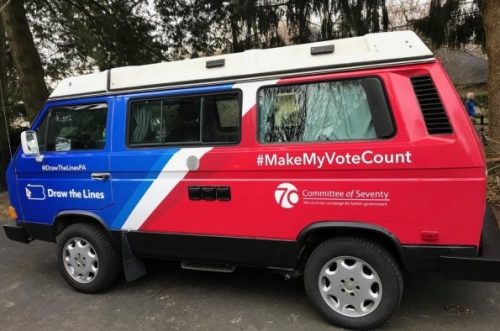 Across the USA, in the build-up to the election, civic groups are looking for unique and creative ways to reach prospective voters amidst the pandemic, which has disrupted the traditional means of voter registration and election participation.

“People don’t vote every day, they vote twice a year – if that – so it’s really important for us to help them understand the rules, their options and how they can make their votes count,” said David Thornburgh, president of the Philadelphia-based Committee of Seventy, a nonpartisan, good government group founded in 1904.

Enter the Committee of Seventy’s Vanagon Westfalia, a patriotically wrapped 1991 van that recently played a crucial role in Philadelphia’s recent primary election, where it helped collect over 5,000 mail-in ballots from local voters.

Before measures to combat the coronavirus were put into place, Pennsylvania had already decided to give voters the ability to vote by mail in this year’s primary election. However, in the wake of the pandemic, the response from voters was overwhelming; over 1.8 million residents applied to vote via absentee ballot or by mail.

“My thought was pretty simple: people would stop and spot this crazy red, white and blue van and think, well, this must be the right place to drop off my ballot,” Thornburgh says.

A VW enthusiast, Thornburgh has owned multiple Volkswagens, including a 1985 Golf and two other “Westys” (a 1987 and 1988 model) before purchasing the Vanagon Westfalia in August 2016.

“A Westfalia is a car that always invites a conversation. People just want to come and share their stories with you,” says Thornburgh. “And I love the driving experience. It’s like a Swiss Army knife on wheels – wherever you stop is home.”

Originally painted a classic white, Thornburgh got his 1991 Westfalia wrapped in Wilmington, Del., in early March before pandemic lockdown measures began. He thought about getting the car wrapped– especially after his wife came up with its quippy nickname – and decided to pull the trigger ahead of the 2020 election. In addition to adding bright colors, he decorated the van with several of the committee’s ongoing campaigns and slogans, including hashtags promoting civic education and engaging messages like “Voters Wanted.”

“We believe in the old-fashioned notion that democracy works better when more people are better informed and get involved at all levels of government,” Thornburgh says.

In the three days leading up to the election, the van made 10 stops at different polling locations in Philadelphia. The team worked 12-hour days helping collect over 5,000 ballots that may not have been counted otherwise due to post office delays and an imminent deadline.

Thornburgh says the Westfalia is the “perfect vehicle to promote local democracy, voting and community awareness” ahead of a busy 2020 election.

“There’s something special about the Volkswagen brand that feels familiar and inviting,” he says. “Volkswagens have always felt like they’re part of our community.” 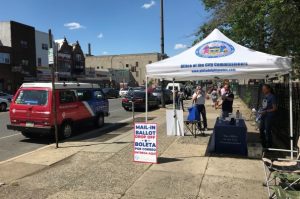