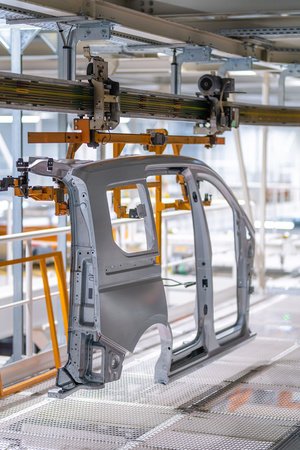 The expansion of the Volkswagen’s plant in Poznań has taken over two years – now the preparations for full production of the new Caddy are nearly finished. Changes made during the remodelling included the construction of a logistics hall, expansion of the body shop and reconfiguration of the factory site.

Dietmar Mnich, Chairman of the Board of Management of Volkswagen Poznań & Poznań Plant Director: “We have concluded around 90 per cent of the capital investment for preparing the plant for production of the latest vehicle models, in particular the new Caddy. The first few vehicles for testing the production processes are currently running through the new facilities. We are planning to start full production in September and then to gradually ramp up the volume and ultimately reach full capacity in 2021.”

New logistics hall
The next step was the construction of the new logistics hall. It provides warehouse space of 46,000m² for components for production of the Caddy and T6.1: engines, bumpers, side windows, door trim panels, bulkheads and fuel tanks. By virtue of the hall being right next to the production facility up to 260 lorry trips per day between Poznań and the site in Swarzędz will in future be saved.

Expansion of the body shop – 14,000m² more space and 450 new robots
The greatest financial and organisational challenge of the past two years was the expansion of the body shop. In addition to the hall, which covers a total of over 14,000m² and has a storage capacity of 200,000m³, Volkswagen Poznań also invested above all in modern technology: 450 new robots capable of multiple functions are being used in the new Caddy’s body shop. They enable precise working and welding of the high-strength, hot folded metal sheets. At the same time, the level of automation in the body shop is rising from 43 per cent originally to over 80 per cent.

New skills in production
The automation of the production processes brings with it comprehensive organisational changes too. “In tandem with the technical advances come requirements for our employees to learn new skills. Making the body of the new Caddy requires much less manual work. The demands in relation to controlling the plant and machinery meanwhile are going up nearly threefold. Over the last two years, we have therefore run over 1,800 training sessions for the plant in Poznań, the aim of which has been to retrain and upskill the team for their new tasks”, says Jolanta Musielak, Member of the Board of Management for Human Resources and Administration.