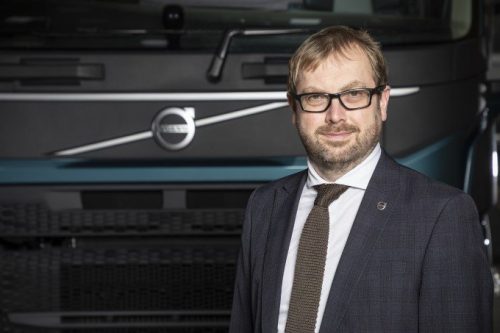 As and from 1 January 2021 Carl White is the newly appointed Used Truck Director for Volvo Trucks UK & Ireland.

His position also encompasses the manufacturer’s Ely-based Trade and Export Trucks operation, which sells older and higher mileage vehicles to the trade, as well as for export to customers in predominantly right-hand drive markets worldwide.

White brings more than 30 years’ experience to the role, having joined BRS in 1990, prior to it being acquired by Volvo Group in 1998. He then transferred to Volvo Financial Services in 1999 as Regional Asset Manager, before joining Volvo Trucks UK & Ireland in 2003 as a Business Development Manager. Since 2014 he has been National Sales and Brand Manager for Volvo Used Trucks, which sells more than 2,000 used trucks every year.

Commenting on his appointment, White says: “Volvo Used Trucks is an integral part of the business and I’m excited to have this opportunity to lead the team.

Volvo Trucks provides complete transport solutions for professional and demanding customers, offering a full range of medium to heavy duty trucks. Customer support is secured via a global network of dealers with 2,100 service points in more than 130 countries. Volvo trucks are assembled in 14 countries across the globe. In 2019 approximately 131,000 Volvo trucks were delivered worldwide. Volvo Trucks is part of Volvo Group, one of the world’s leading manufacturers of trucks, buses, construction equipment and marine and industrial engines. The Group also provides complete solutions for financing and service. Volvo Trucks ́ work is based on the core values of quality, safety and environmental care.

“We have worked incredibly hard to ensure we set the standard for used trucks; from quality of vehicle preparation to manufacturer-backed warranties that are second-to-none. I’m focused on ensuring we maintain these high standards and continue to build on the many added-value benefits we offer our customers.”

White, 49, takes over the role from Phil Wilkes, who has headed the used vehicle operation for the last two years. Wilkes will support the business through a transition period for the next three months, leaving at the end of March, after 23 years’ service with Volvo Group.