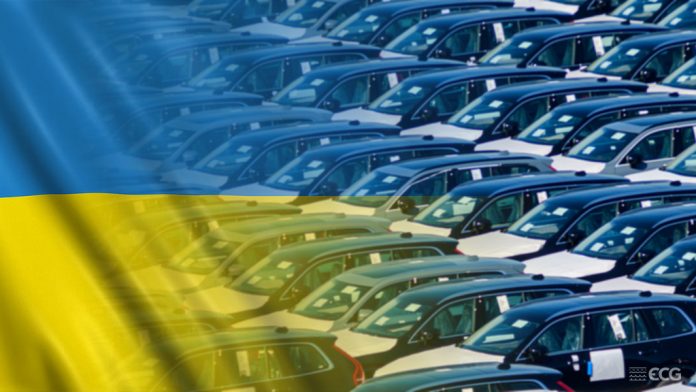 “Our industry stands shoulder to shoulder with Ukraine and probably employs more Ukrainian citizens than most in Europe. ECG, The Association of European Vehicle Logistics is raising funds to support those of our members who are very actively engaged in the growing humanitarian crisis. At the same time the sector is experiencing extremely serious impacts on several fronts which need to be mitigated. The result is a third successive year of crisis following Covid and the microchip shortages.

Yet again global supply chains are being severely tested and are found wanting once more – the automotive industry is now seen to be heavily dependent on Ukraine for the sourcing of various parts and raw materials. The most immediate and serious issue appears to be wiring harnesses, which were manufactured in huge numbers in Ukraine by a large workforce that will not be easily or quickly replicated elsewhere. Whole factories are already being shuttered as a consequence, and with no reopening date in sight. Manufacturers are talking in terms of months rather than weeks.

Inflation, rocketing before the conflict began, is now being driven ever higher by energy and raw material costs. It is energy prices in particular, fluctuating wildly and close to record high levels, causing the industry problems. Widely-used fuel and bunker clauses cannot cope with these changes and compensate operators, as they are designed to do. Bunker prices have doubled in 6 months, increasing costs for some vessels by more than $25,000/day! In Italy where the market is characterised by many owner/drivers – so called padroncini – it is reported that many have simply stopped working rather than accept rates which would lose them money. Many companies, that are unable to act in this way, are rumoured to be citing war as a reason to trigger ‘force majeure’ clauses in order to negotiate reasonable solutions. And fuel is just the most significant issue, huge increases in raw material costs are already feeding through to drive up the prices of assets whether it be ships, rail wagons or car transporters. Inflation generally is driving up wages. Every cost an operator faces is rising fast.

Extraordinary times call for extraordinary measures and, unless contracts are revised quickly, what is left of the industry will grind to a halt as cashflow issues strangle operations. The OEMs and other clients need to immediately amend contracts to allow a much faster adaptation to changes like fuel prices, and they need to be fully transparent with their suppliers about future volumes so capacity can be planned.”

Guiding you through Brexit by P&O Ferrymasters