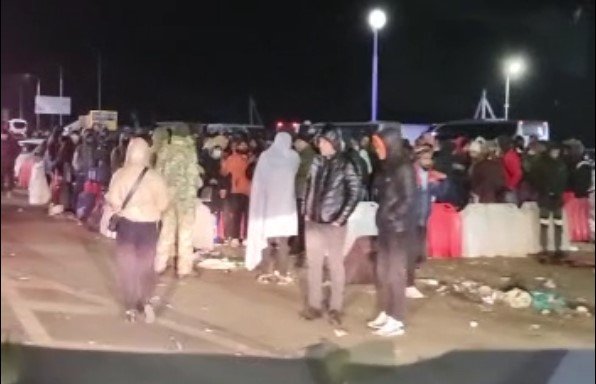 Transit Magazine in Romania has made a special section of the website dedicated to Ukraine: https://traficmedia.ro/arhiva/ucraina/

“You can use Deepl translation, it is very good,” explains Marilena Matei, editor.

You can find some news about the influence on transport. Some you know – they have been published in Europe, we have also some news about the Romanian truckers waiting to enter Romania from Ukraine a couple of days. One experienced the confiscation of the whole charge – tyres – as ‘war capture’. The tyres were from Russia to a Romanian customer. Some 20 trucks were just kept at the border for days! Some Romanian trucks were waiting, some Turkish… no reason – this is a normal behaviour of the Ukrainian border Police, the carriers said.

The Road Hauliers Association tried to contact Embassies… after many interventions last night they were let go. The transport companies were upset because even if they go with food, medical assistance, powerbanks etc. the people on the border still want their small gift!

Anyhow, the main thing is that many transport companies in Romania donate lots of money to Red Cross to supply Ukraine with food and medical equipment, but also thousands and thousands of people help to raise goods, food and sheets etc.

We received 160,000 Ukrainian people so far – most of them needed help a couple of days just to be transported to the border with Hungary where relatives from all over Europe came to take them. Others were able to fly further from Bucharest, some are still in some mountains resorts…

The poorest who have no way to go, no friends, no family, no relatives in other countries of Western Europe stay in Romania. There are at the moment few thousands who asked for political exile and some 30,000 thousands on the way to somewhere.

Important is to mention that most of these people were helped by the population, who organised exemplary and wanted to help out. Authorities offers support only in paper operations, entrance in the customs…

But most of the accommodation is offered by normal people.small companies in tourism. In the border villages all hotel/mansions in the region, also the hotels at the Black Sea receive refugees on their own expenses.

In each house there are 2-3 families – mothers and children – accommodated. It is a great sympathy among the people seeing the small children frozen after 4 days staying in the Ucrainian customs to register any person out.

For some days the helpers go and spread the food also on the Ukrainian part of the border where there are more than 10,000 people waiting in snow.

There are still people coming by sea, walking… some with trains – there was a train full of people from Azerbadjan entering yesterday in Romania which will travel until Bucharest, they will stay here a couple of says until the Embassy will find a way to board them by plane until Baku.

But the things are happening not only on the human side, but also economically we expect an even higher inflation that 8% expected for the first 4 months of this year and after 8,8% last year.

Lots of people in Romania are afraid the war is spreading here too and change money in EUR or USD and the withdraw money from banks and this panic actions will end up soon with a depreciation of the Romanian currency and end finally in inflation.