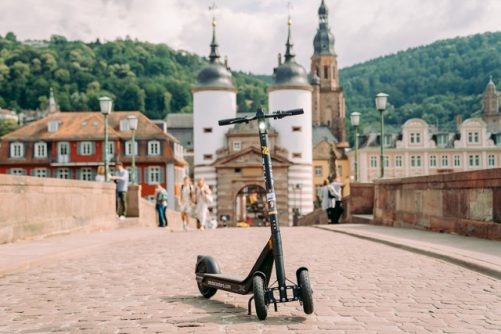 Irish start-up ZEUS Scooters celebrated its launch in Heidelberg, with a scooter parade at the city’s Central Train Station where thousands of commuters travel in and out of the southern German city each day.  The cavalcade of three wheeled electric scooters were ridden from the train station and travelled over the Kurfürstencomplex and across the famous Old Bridge.  The founder of ZEUS Scooters, Damian Young met with Heidelberg’s Lord Mayor Prof.  Dr.  Eckart Würzner who officially launched the new range of electric scooters at the ‘Inn zum Nepomuk’ where several local dignitaries and press had gathered.

Damien and his team were outside the Central Train Station all morning in order to allow the public to test drive the scooters and the reception was extremely positive.  “We wanted to stand out from the other transport providers right from the start and our unique proposition lies in the fact that our scooters have three wheels rather than two, this makes them more stable and ensures a smoother rider for the user,” said Young. “We are very pleased with the interest and engagement we have already experienced today with the public and are delighted to now have 50 Zeus Scooters available for hire here in the city.  It is our intention to grow that number to 200 electric scooters here on the streets in Heidelberg over the next few months. We want to take this opportunity to thank the local authorities here for their support. Our light weight, three-wheeled scooters offer a welcome alternative to commuters relying on public transport and will be a safe and healthy means of transport, particularly during the current pandemic.  Heidelberg’s Lord Mayor Prof.  Dr.  Eckart Würzner said the concept of e-scooters was pioneering and offered a sustainable and environmentally friendly transport option for the people of Heidelberg.

The new ZEUS e-scooters are now available to hire at the main train station,  Bismarckplatz,  at  the  stations  of the southern and western city,  as well as in the  Neuenheimer  Feld and in  Stehen Handschusheim The process to hire a ZEUS Scooter is very simple and inexpensive.  The user simply downloads the free ZEUS Scooter app and the app identifies where the nearest ZEUS Scooter is located through its geofencing capability.  Each ZEUS Scooter has a QR code that is scanned by the rider and this unlocks the ride. The user then stands on the scooter and starts to use their ride with usage being charged between 15 and 20 cent a minute.  Research has shown the average current length of time that someone will ride on a scooter is circa 15 minutes but the user can also opt for ‘park mode’ on a ZEUS Scooter if they are not using their scooter for a period of time but want to be able to hop on it again quite quickly without having to search for another one.  When the user is finished with their scooter, they simply park it up anywhere that’s permitted through the app as it does not have to be brought back to a depot or dedicated parking area – it’s then ready to be taken by the next ‘ZEUSER’.

Agreements are now in place to roll out ZEUS Scooter in six other cities in Germany while the company is also in talks with a further 28 European cities.  The plan is to have over 7,000 scooters on the roads or cycle paths of Europe by the end of 2021. Further technical innovations are also being developed. Later this year, for example, Young and his team plan to upgrade the electric scooters with so-called ‘smart helmets’.    Users who want to wear a helmet can unlock it from July via the app and access it at no extra cost.